Gwenno Dafydd is a Welsh author. Her book, Stand Up and Sock it to them Sister, is the definitive book about female stand-up comics. This book will challenge and explode the myth that women are not funny, show why it has been so difficult for women to succeed in this medium and celebrate and document some of those women who have succeeded.

The material for this book is the result of twenty years of research. Ms. Dafydd has interviewed eighty-four comics working in Britain and internationally – some pioneering and well known like Joan Rivers, Jo Brand, Jenny Eclair, Helen Lederer, as well as newcomers Nina Conti and Shazia Mirzah.

Stand Up and Sock it to them Sister was published in August 2016 by Welsh publisher Parthian Books.

Gwenno has been a professional broadcaster, singer and actress since 1980, working in film, television, radio and theatre. She has had numerous pieces of work and articles published, including a one-woman show about French chanteuse Edith Piaf, entitled ‘Passionate about Piaf’, twelve pieces of children’s poetry and a children’s musical Christmas show for BBC Radio Cymru. In addition, Ms. Dafydd has written 150 lyrics in both Welsh and English, including the new Saint David’s Day Song – ‘Saint David’s Day Anthem’.

Gwenno is a Leadership and Public Speaking Coach. Further details can be found on her website www.gwennodafydd.co.uk 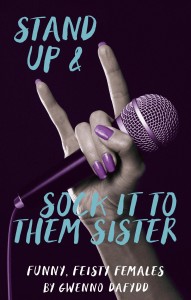