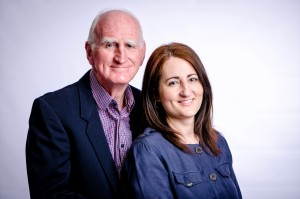 Michael Mahony hails originally from Dublin, Ireland. In 1966, he graduated from University College Dublin (UCD) with an honours degree in Physics and Mathematics, and in 1982 with a Masters degree in Business from the University of South Africa (UNISA). He has spent the greater part of his life in Africa, both in Nigeria and South Africa. Now, a retired IT guy, he lives with his wife Mary in Johannesburg. They have been blessed with three sons and three daughters and a wonderful multinational clan of grandchildren.

Valerie Ganzevoort was born in Johannesburg. In 2001 she graduated with a BCom degree from the The University of the Witwatersrand, and lives in Johannesburg with her husband, Wybrand, and their three children. In between exploring her interest in Children’s Fiction, and writing in collaboration with her dad, she is primarily focussed upon raising and home-schooling her three very young children.

V. M. Devine is the pen name for the writing collaboration of the father and daughter duo.

Their first novel, “A Terrible Beauty – the murder at Joyce’s Tower”, is a chilling detective story that is both clever and sophisticated.  It draws the reader into the mystery that is Ireland – both in its beauty ad its terror.  A sequel in what is intended to be a series featuring the beautiful and intelligent Chief Superintendent Fírinne Jeffries of An Garda Síochána (Ireland’s national police force) is currently underway.  The setting for this second novel is also Dublin, this time in the world renowned Chester Beatty Library.

The book has been cataloged into the Dublin Writers Museum and is on permanent display at the James Joyce Tower for visitors and tourists to flick through at their leisure.

“A Terrible Beauty – the murder at Joyce’s Tower” is currently under submission.