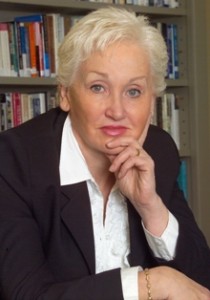 Terry Prone is a phenomenally successful Irish writer, several of whose books have been international best sellers.  Her novels have been translated into Russian, German, French and Dutch.  Her short stories have won the most prestigious Irish literary prize, the Francis MacManus Award.  Her fiction and non fiction have been published in the London Times, Sunday Telegraph and the Reader’s Digest.

Terry had her own radio program at age nineteen, was an editor of a magazine by twenty-one, wrote her first book by twenty five.  That book led to twenty six others, both fiction and non-fiction. She has been script writer,  has written numerous TV and radio plays, and has written more than 8,000 speeches for political and business clients.  Terry is a household name in her own country as a communications consultant, owner of The Communications Clinic and TV personality. She is one of Ireland’s most popular after dinner speakers and conference chairpersons.

Terry contributes a weekly column to the Irish Examiner, The Irish Times, and The Evening Herald and is a regular contributor to The Sunday Tribune, along with being a regular guest on TV 3’s  Elaine Show.

Trace Literary Agency is delighted to represent Terry in the US market.